Made by Britain nomination 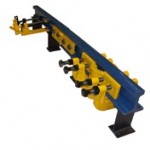 Made by Britain’ has been developed as a collaboration between the Associate Parliamentary Manufacturing Group, and the 1851 Royal Commission: an organization with a long and distinguished career in supporting British industry.

Local MP, Jenny Chapman, has nominated Henry Williams for the Made by Britain scheme to showcase the manufacturing expertise of their Darlington based factory and, in particular, their range of railway fishplates.

“Henry Williams has been manufacturing products for the railways for over 120 years now. Whilst their product base has diversified over that time, their ‘fishplates’ remain very much in demand, the design having moved with the times. Our railways couldn’t operate without them. “
Jenny Chapman.

In 1883 Henry Williams opened his first works in Polmadie near Glasgow, to make the 5 patented articles he had developed for the railway.

In 1899 Henry died and the business was taken over by his 4 sons who continued to develop railway parts and grow the business. By 1911 their success resulted in another expansion and this time they decided to move the business to the then home of the railway Darlington. They installed larger hammers and began wholesale production of a number of railway forgings which included Fishplates.

Today Henry Williams is a multi disciplined engineering and manufacturing company, made up of 3 divisions and operating in a diverse range of markets such as defence, oil and gas, marine, construction, transport, and mining.

They maintain their close links with the railway, and manufacturing products for this sector is still a key part of our business, as can be seen from the Fishplate example below.

They employ 97 people at their facility in Darlington of which 10 are involved in forging over 5,000 fishplates per month or 60,000 per annum. The company recently invested £750,000 on a rapid acting German made Banning hammer , to enable them to make these fishplates quicker and more efficiently, as well as competitively.