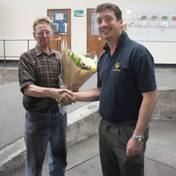 1965 was a memorable year for Geoff Busby. Aside from the recollections of The Beatles, floral shirts and flared trousers it was in May of that year that he joined Henry Williams in the machine shop. He changed roles a couple of times during that decade but then settled in the forge where he worked until this week.

Geoff has seen many changes to the company during his tenure including the installation of three new forging hammers to cope with the expansion of the business away from its historic railway bias. The technology changes must have seemed quite revolutionary in those days as the machine shop moved to computer modelling with automated die making and the very traditional gas powered furnaces being replaced by electric induction heaters.

As Geoff is obviously in touch with these changes he was presented with a laptop from the company and some gift vouchers from his colleagues. Geoff, left in the photo, also received from Managing Director Andy Nelson some flowers which, hopefully, were duly delivered to his wife, Pauline.