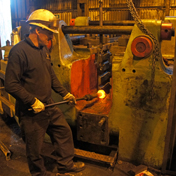 An increase in demand for precision forgings has led to Henry Williams having to increase their manufacturing capacity. After investigating the machines on the market, it was decided that the best unit available would be an existing COVMAC upsetter restored to its original condition.

So it was that one of the oldest production units in the Henry Williams forge has been refurbished and brought back into service. The COVMAC upsetter, known affectionately as COV 7, which has not been used for over a decade, has been completely overhauled, restored and brought into service to run alongside our ACME upsetter giving us a range of bar stock from 20mm to 140mm.

Whilst not quite as elderly as the vintage 1930s ACME (which underwent an extensive £150K refurbishment 2 years ago.), COV 7 was installed at the Darlington site in the early 1940, and worked continuously until a drop in demand caused it to be mothballed in 2000. Following its own extensive refurbishment it can now return to making a valuable contribution to the forge production.

In recent years the forge has been progressively converting from gas fired furnaces to induction heating units ideal for forging pipes which is precisely where the additional business has been won. Of course this has led to further investment being made in a new induction heater to supply heated bar to meet the increased usage of the two upsetter workhorses.

Pictured is Glen Boyce holding the first billet forged this millennium in COV 7.